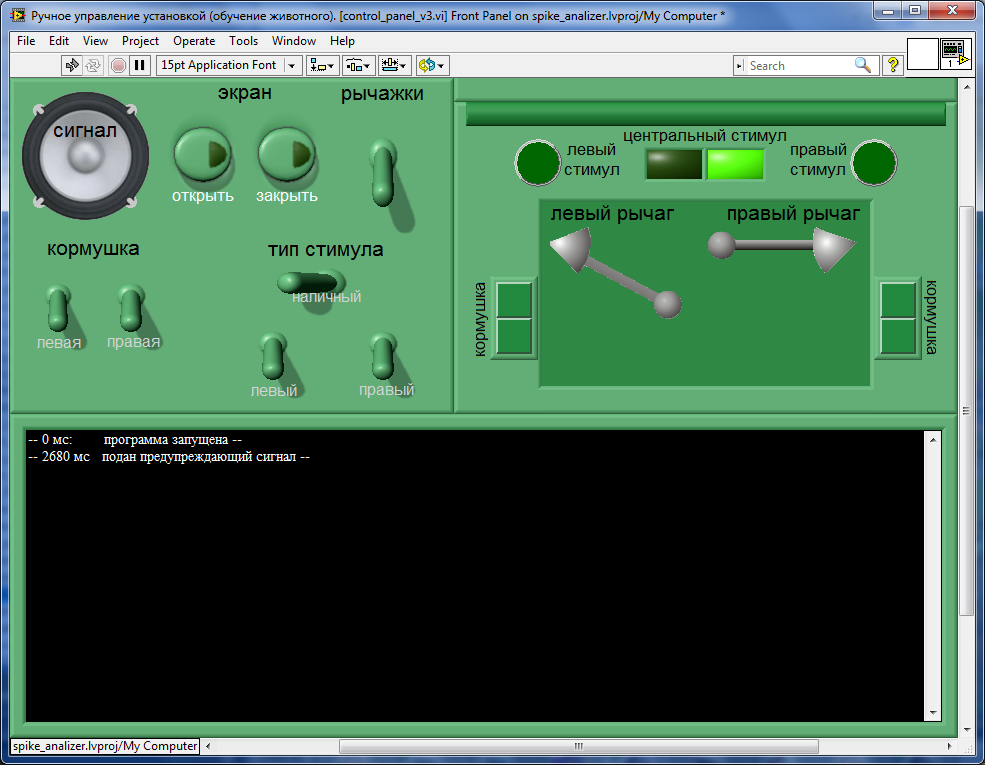 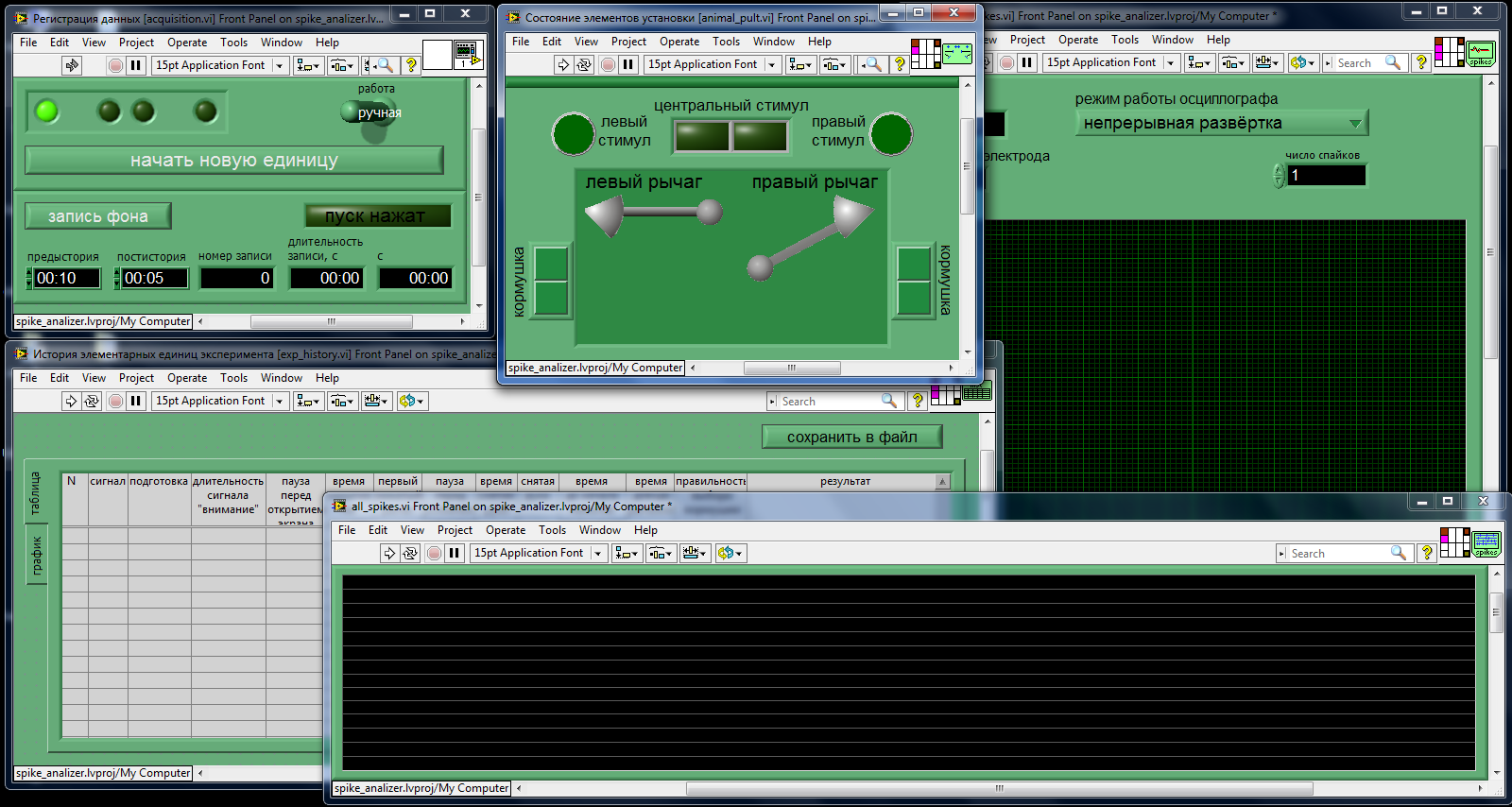 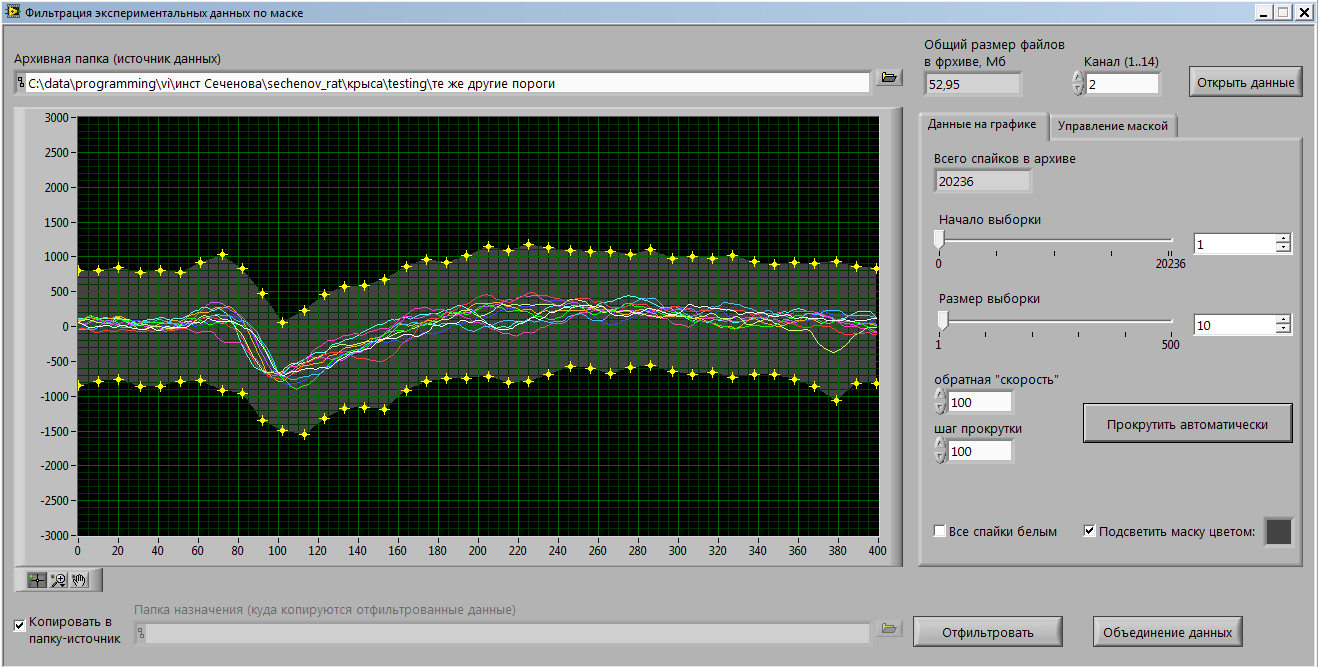 In the course of the experiment the animal performs a complicated sequence of manipulations with the panel in front of it. The system registers brain activity and actions of the animal controlling the progress of the experiment. The first version of the system was developed for working with monkeys, the second was adapted for rats. The work takes place in three stages.

In the first stage the laboratory staff teach the animal; the experimenter needs full control of all the system elements for this.

In the next stage the experiment itself takes place. In this case the actions of the unit must be accurately synchronized, that is why all the manipulations with the elements of the unit are carried out automatically. All registered data are written into a file for subsequent analysis.

The third stage is data analysis. During preliminary processing of the signal, filtration of spikes as per a mask set by the user is implemented. At the end of the process, the experimenter obtains a file, which in high probability contains the data from only one neuron. These “clean” data allow to study processes that take place in the brain during learning and decision-making.

Calculation of results when spraying a substance through a mask 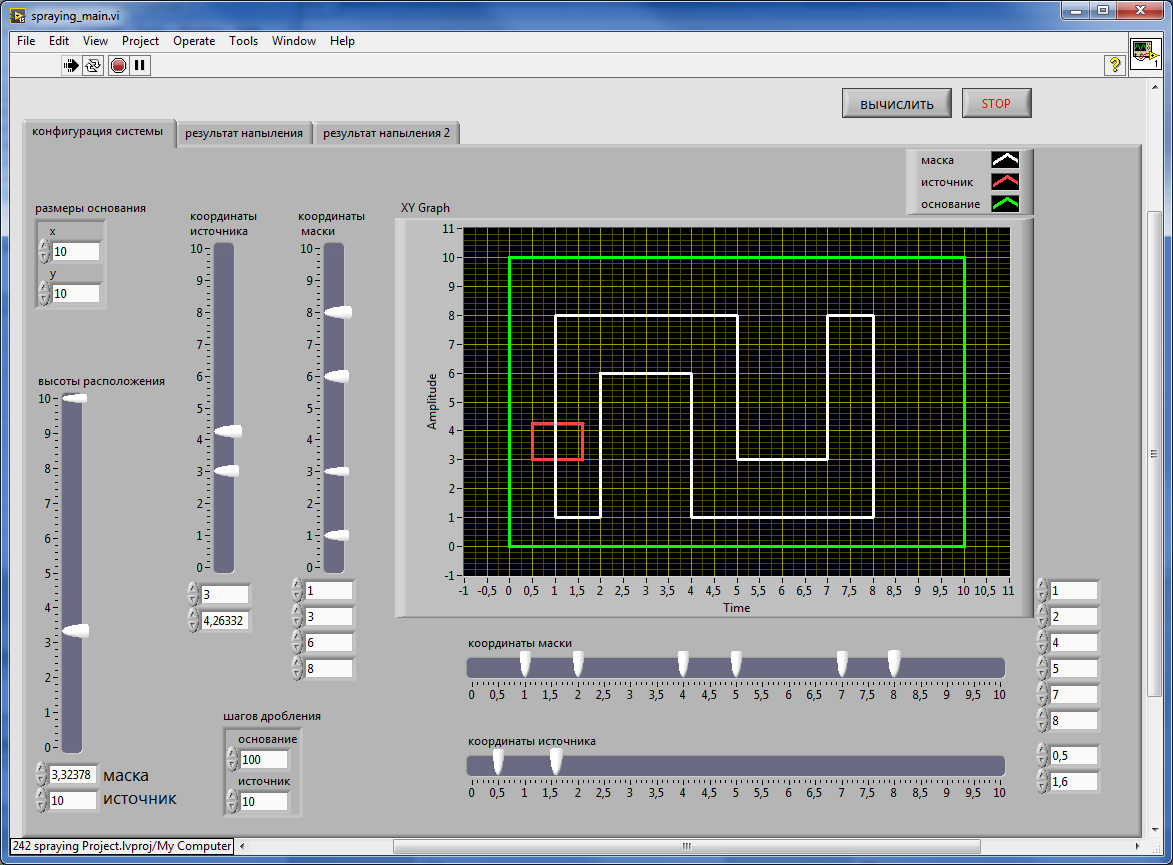 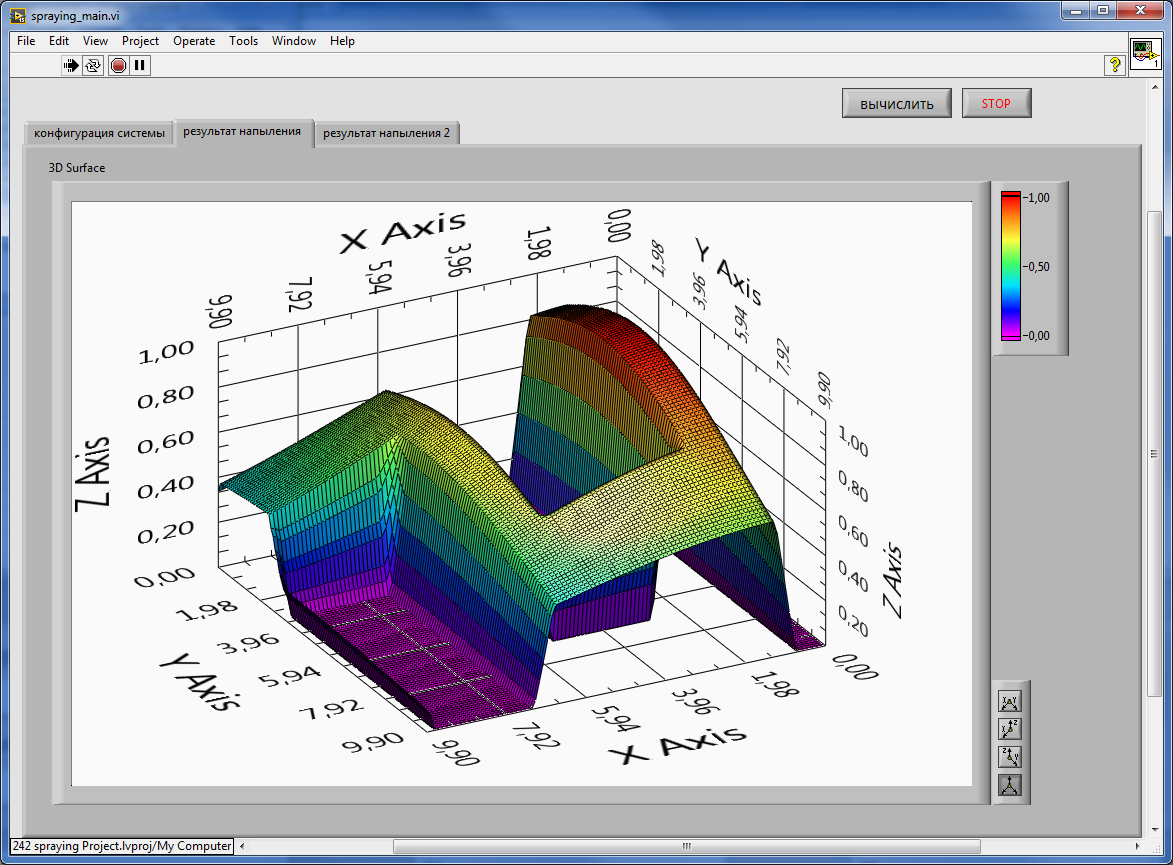 The program calculates the result of spraying a substance through an S-shaped mask. Parameters of the mask and the radiant are set at the first step. Also, the required accuracy is set.

Then the program calculates the result of spraying and displays it as a 3D chart, where the height is additionally marked with color to simplify perception of results. 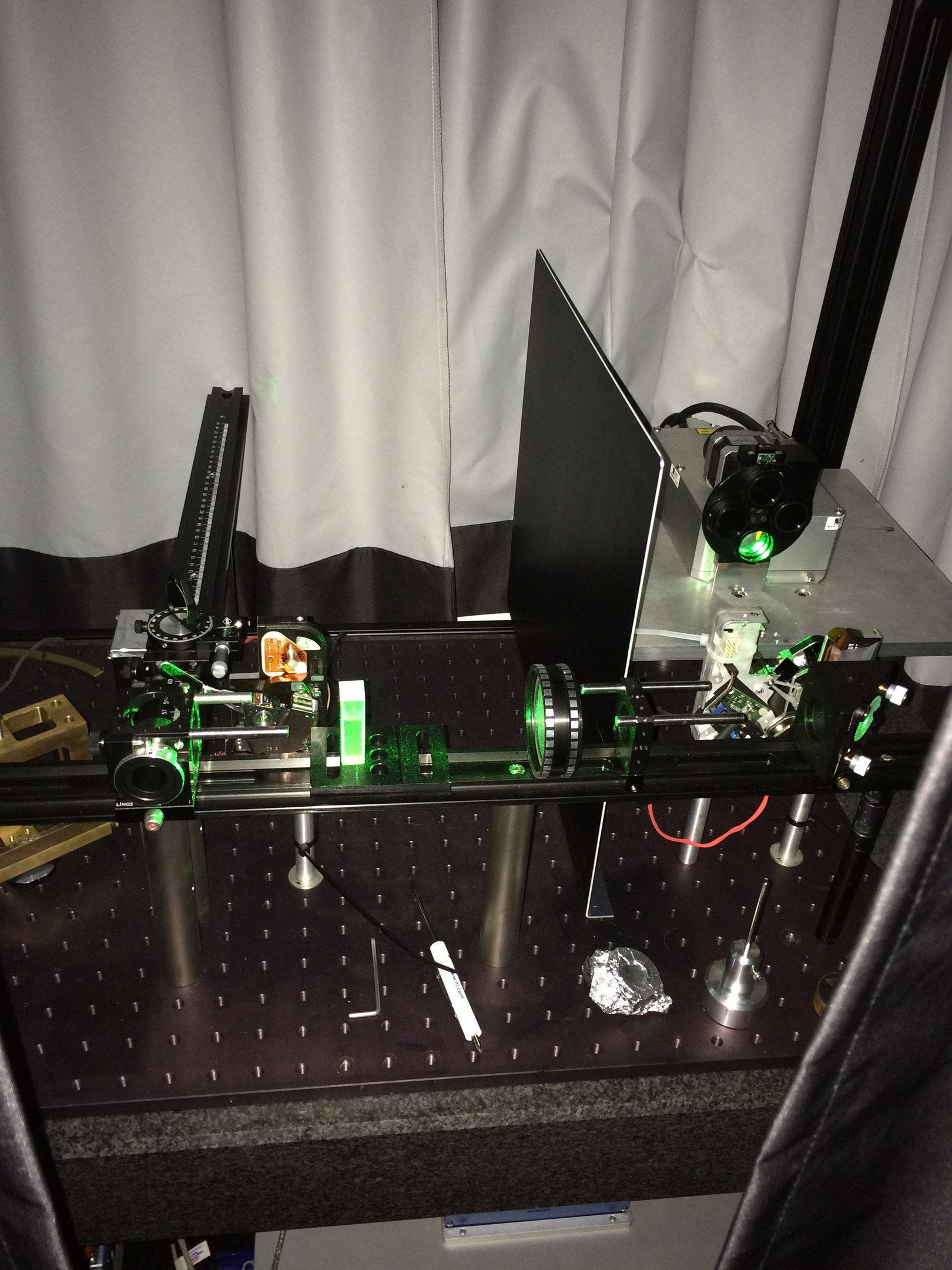 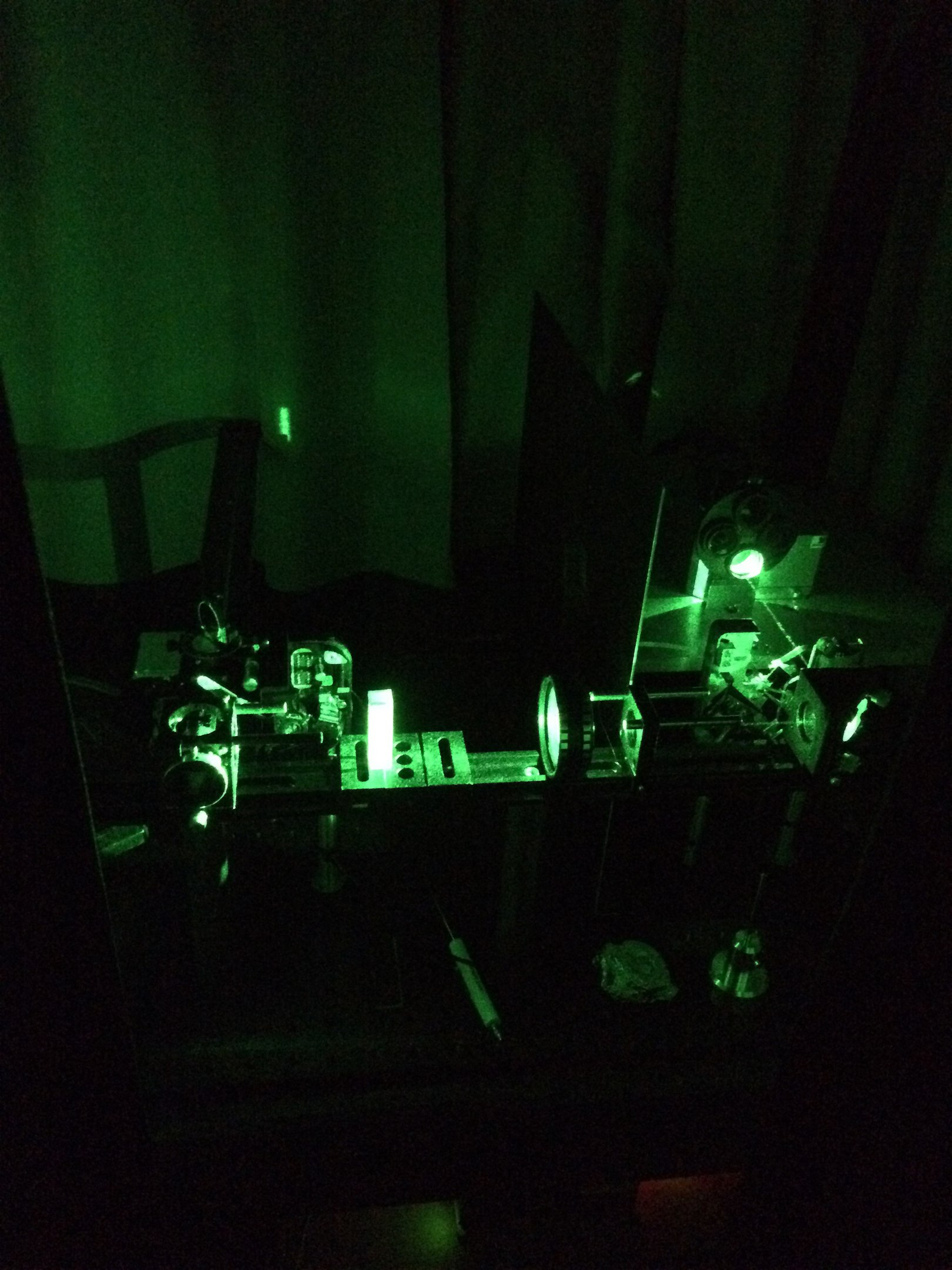 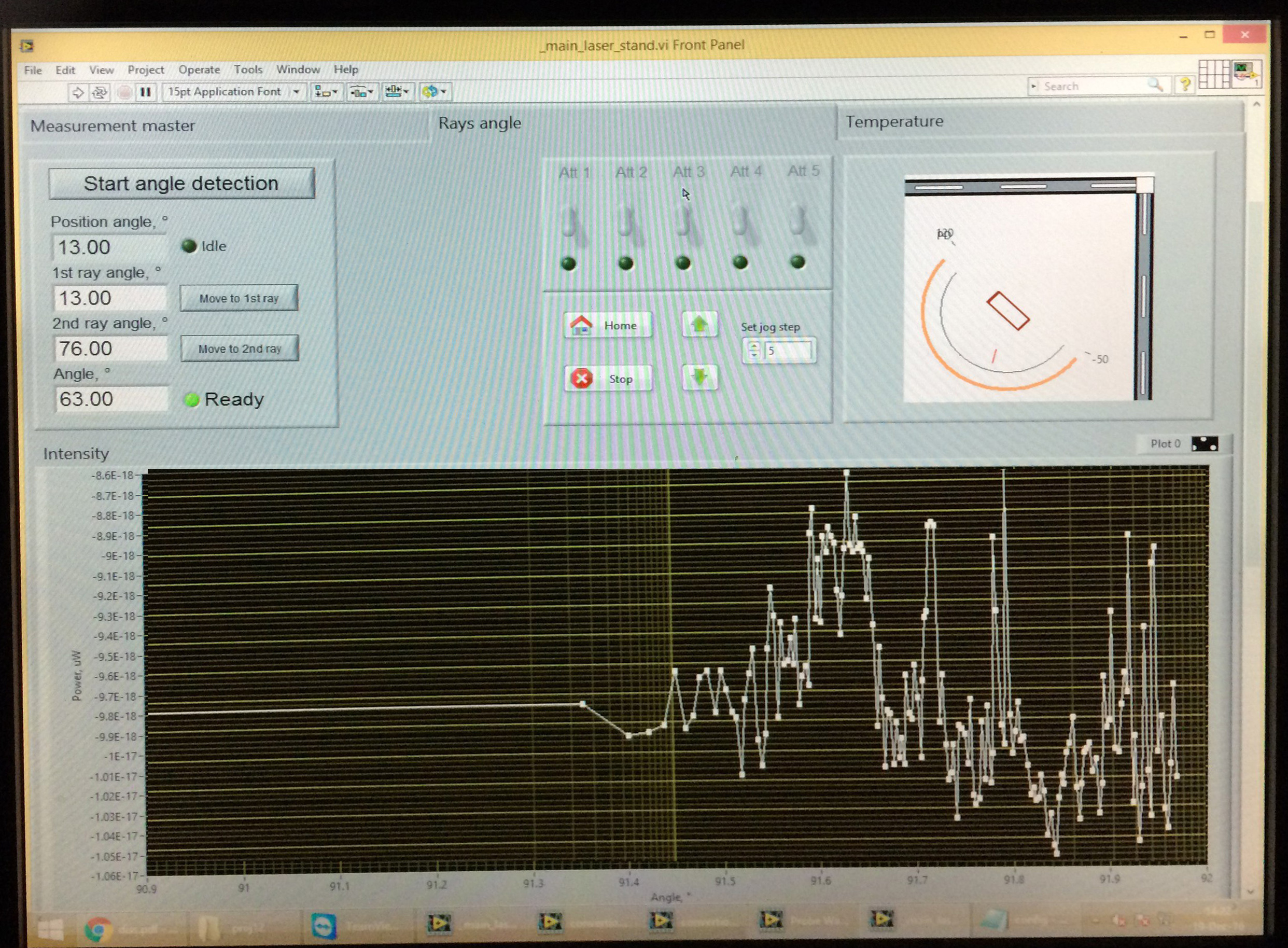 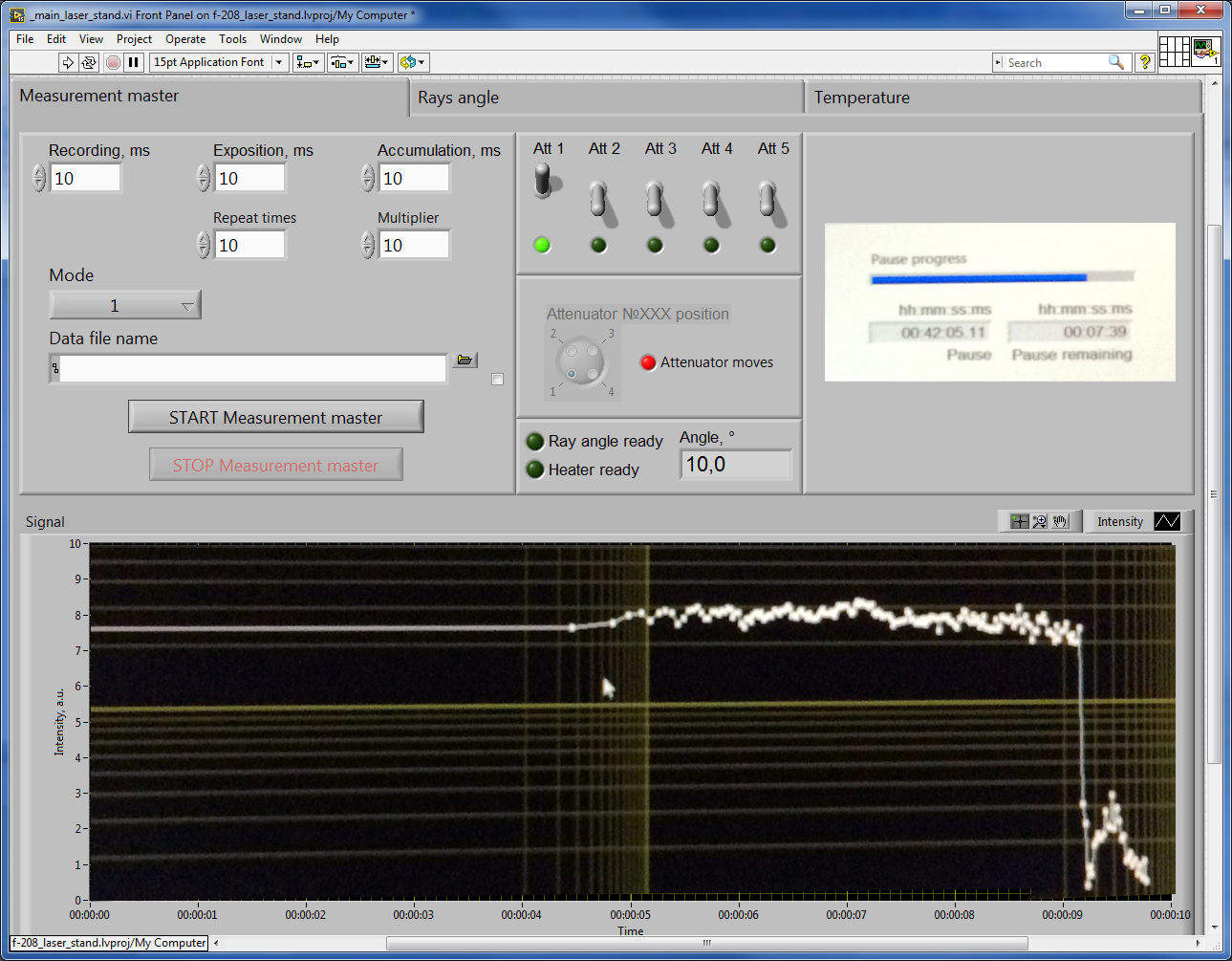 The system controls the progress of a complicated optical experiment. The duration of one experiment is from several days to several months. Controlled elements of the unit: a rotating table with a photo detector installed on it, several mechanical two-position shutters (open/closed) and one four-position shutter, a photo detector with an electronic shutter, a heater for the tested sample.

When preparing for the experiment, the system in a semi-automatic mode searches for the position of two laser beams, after which a photo detector is placed in one of the beams.

In the course of the experiment it is necessary to maintain the temperature of the sample within the range of ±0.5 degrees from the pre-set value. The PID controller of the program manages the external heater.

During the experiment it is necessary to take the readings of the photo detector after pre-set, gradually increasing time intervals. In the beginning of the experiment, the pause between measurements can be several dozens of milliseconds, whereas at the end of the experiment it can reach several days and even weeks; at the same time, it is required to maintain millisecond accuracy of time intervals. All this time the unit must work continuously maintaining a stable temperature of the sample and registering the data obtained from the photo detector.

Structural and statistical analysis machine for IT products

Program is intended for “dissecting” texts for the purpose of their statistical and structural analysis.

In the course of its work the program gradually “learns” to recognize parts of words, parts of speech and select synonyms for words.

The project is at the intersection of linguistics, statistics, cryptography and machine translation.